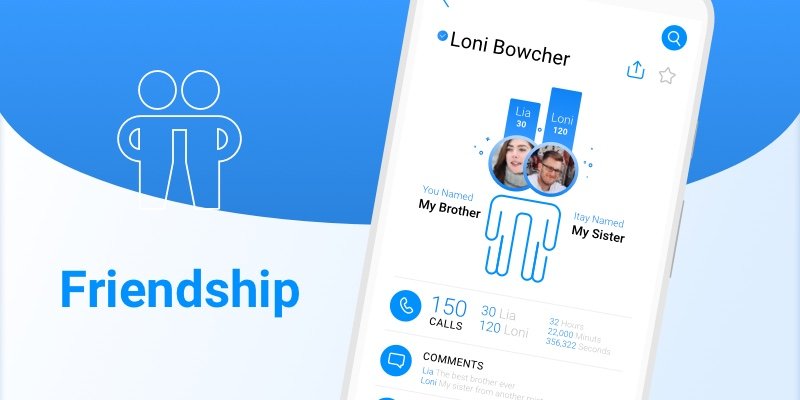 Friendship: Who Calls Whom More?

Keeping in touch requires effort on both sides, and during our lives, we all experienced that feeling we are investing more in a friendship than our friend is. Or, on the contrary, we were the ones accused of total neglect. But is it true? Or just a false accusation? With our new feature, you can find out how many times you called your friends compared to how many times they called you.

How do you reach the Friendship screen? Easily!

Open  – Meapp—> chosse of the wanted contact number—-> To the right of the profile at the top, you will see a new tag call

Here is a daily example of using the Friendship feature:

Imagine that Justin, your best friend from first grade, accuses you that only he calls you all the time. And you are baffled about where these allegations are coming from because it seems to you that you are continually initiating calls and that you talk at least four times a week. Well, why assume when you can verify?

That’s why we have developed a new feature, called the “Friendship Screen”.

This feature will allow you to view things you and your friend have in common, including who called whom more, how long you talked to each other, and how many contacts you have in common.

Please Note: The Friendship tag will appear only if that number is saved on your contacts.

A gentle tap on the friendship tag will open a screen displaying the following data:

The statistics of the calls between you and that contact, how many times you

* called versus how many times they called you.
* How you call each other in your contact list
* Length of the call- detailed by hours, minutes, and seconds.
* Comments, if any.* How many contacts do you have in common.
* How many times you viewed each other profiles
* You can use the sharing feature on this screen and easily share it on social media.

So, if you found out that Justin was right and you did neglect him a bit, it’s time to show him you appreciate this Friendship. But if you found out you were right and called him four times this week, share the membership screen with him and show him that you have not forgotten him for a moment 😊.

We use cookies on our website to give you the most relevant experience by remembering your preferences and repeat visits. By clicking “Accept”, you consent to the use of ALL the cookies.
Cookie settingsACCEPT
Manage consent

This website uses cookies to improve your experience while you navigate through the website. Out of these, the cookies that are categorized as necessary are stored on your browser as they are essential for the working of basic functionalities of the website. We also use third-party cookies that help us analyze and understand how you use this website. These cookies will be stored in your browser only with your consent. You also have the option to opt-out of these cookies. But opting out of some of these cookies may affect your browsing experience.
Necessary Always Enabled
Necessary cookies are absolutely essential for the website to function properly. This category only includes cookies that ensures basic functionalities and security features of the website. These cookies do not store any personal information.
Non-necessary
Any cookies that may not be particularly necessary for the website to function and is used specifically to collect user personal data via analytics, ads, other embedded contents are termed as non-necessary cookies. It is mandatory to procure user consent prior to running these cookies on your website.
SAVE & ACCEPT